Taking Back Our Definitions

Posted on October 7, 2018 by Nicole Lawrence 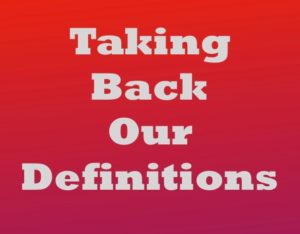 Taking Back our Definitions

I recently read an article on Facebook on why white women still support the GOP despite the controversy over Kavanaugh’s nomination to the Supreme Court.  It talked about their firm belief in a two-gender system, male superiority, what some term chauvinism or patriarchy.

I’ve read before that the far right holds these beliefs, so this wasn’t new to me. One thing that did stand out was that these women consider themselves the “virtuous middle” of the country. I had to ask myself, “Since when do the these women get to define what virtue is?”

I would hazard a guess that their definition of virtue included patriarchal beliefs such as women should be seen and not heard, a wife is there to serve her husband, and that men know more what women need than a woman does. It is hard to argue with them and get them to see a different view – they feel secure in their superiority of virtue.

Our language is binary in nature – the term ‘up’ includes ‘not down’ and ‘black’ indicates ‘not white.’ An unspoken, opposite is implied. Using the word virtue to define themselves, implies that everyone not “like them” are somehow un-virtuous. The women of the GOP aren’t actively saying this – they don’t need to. Our binary language says it for them.

Why should I be labeled by how they define virtue or non-virtue, as the case may be? Is their definition of virtue even true? I know their definition isn’t true for me. Left unexamined it remains the standard measure of society.

Loyalty, honor, truth, integrity, virtue, grace, and courage are just a few of the values that need to be examined for outmoded definitions. Feminine, masculine and what it means to be a man or a woman – straight, gay or transgender also need to be assessed. The old definitions contain assumptions that no longer work, and may have never even been true.

We, as a country need to take a deeper look at the fabric of the qualities, ideals, principles and values we have been living by now and into the future. We need to examine these threads for untruths, flaws and outdated definitions that hamper all of us. When these qualities go unchallenged, we are defined not only by the spoken, but also the unspoken/implied limits by default. We need to start taking our definitions back.

It’s like playing a game of baseball with broken bats, half the leather on the glove gone, chunks missing out of the ball, and crying foul on the other team. It is the equipment that isn’t working. These unexamined values keep us at each other’s throats. It may be time for a national debate. All sides may not agree on all the components that define these qualities, but hopefully there will be common ground where we can begin to build bridges.

This entry was posted in Uncategorized. Bookmark the permalink.

1 Response to Taking Back Our Definitions