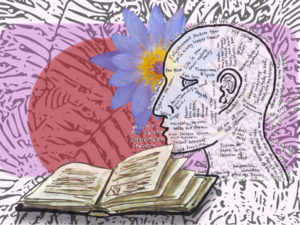 There’s a new thing happening in the world of the New Age, some of you may agree with it. I do not.

It is the use of “no story.” I’m talking about when someone asks how your day was and before you can get 3 words out, they chime in with, “That’s just story! I don’t want to hear any story.” Somehow, a tool used to help people gain freedom has become a response in everyday conversation.

A few years ago I successfully led a releasing group. One afternoon, as some of the members got settled, they were commenting to each other that this idea or that statement was just a story.

I asked if anyone had an issue they’d like help with and one of them raised their hand. She was a healer and told me that recently her clients had seemed unsatisfied with her sessions. I asked her to describe what she does with her clients.

“Well they come in,” she began. “I get them settled and ask what they want healing with. As soon as they start to talk I stop them and tell them I don’t want to hear any story.”

“Then, how do you know what they need help with?” I asked her.

“I just do what feels right,” she replied.

“Do they feel like they are getting help?” I inquired.

“They seem kind of upset and then leave,” she admitted.

The emphasis and energy she and the others in the group were using toward each other held the implication that story of any kind was wrong. One of them even turned it against themselves, lashing themselves for saying something they considered story. I worked with the healer and the rest of the group to come to a more neutral place around the concept of story.

A few months ago I was walking with some people and we passed a building being renovated. The plans were for it to be a restaurant and we were commenting on the progress when one person quipped, “Well that’s just story!”

It is painful to be on the receiving end of someone cutting you off with “That’s just story!” And in my releasing group it was painful to see people doing this to themselves.

Being used in this way it has the impact of dismissing another’s or one’s own experience. And using the word “just” conveys the idea that something isn’t worthy of time or attention – it is a subtle form of demeaning.